Brexit Countdown: Deal or No Deal?

The only certainty so far is that a deal is not there yet.

Parliament kept no-deal risk alive and voted to take Brexit negotiations to the wire. To avoid no-deal, Prime Minister Theresa May might request an extension of Article 50 and try and negotiate a new backstop to avoid a hard border between Northern Ireland and the Republic, or she will reach out to the opposition. But both paths are fraught with political risk, leaving early elections, as well as a second referendum (and thus no-Brexit) as possibilities later this year, even though their chances may have diminished in the short-run.

In addition, so far, 8 Labour MPs and 3 Conservatives have resigned their whip and formed a new group in Parliament called “The Independent Group”. They are denouncing “extremist” views in their respective former parties, but are mainly united in their anti-Brexit stance. Seven represent constituencies which voted to remain in the EU in 2016, the remainder comes from Leave-constituencies. Media abound with speculation that more MPs from both sides will join them.

Given the above summarized “mess”, we give up in this paper to the attempt to predict what could actually happen from now to the 29th March, and rather we look at some factual financial data in order to try to assess if the Brexit (potential ?) impact has been already factored in or not.

With the UK’s scheduled departure from the EU edging closer and closer, most business and consumer confidence gauges have fallen below their long-run averages (Figure 1). 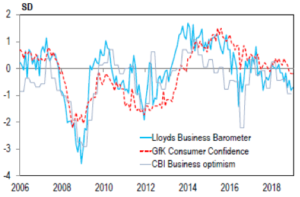 However, the uncertainty may not affect (or not yet) actual activity much. For example, households’ economic expectations are at their weakest since the euro crisis (Figure 2), but they continue to make major purchases at elevated rates. Similarly, the labour market is also undeterred by Brexit uncertainty with employment growing, unemployment falling and wage growth spiking in recent months (Figure 3). This supports consumer spending in 2019 fundamentally, alongside lower inflation. 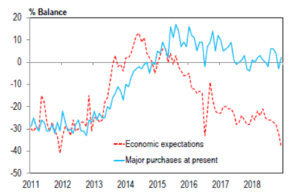 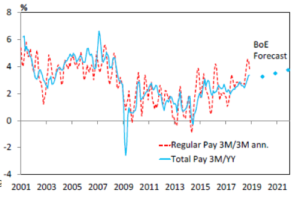 Such data, somehow surprised us and, being generally negative on a Brexit option, we believe represent an element of attention for the future: real economy still to be impacted by a real world with UK out of EU.

Legally, a no-deal Brexit is still the default, and we expect it would be a huge shock for the broader rates markets. The UK/EU referendum result helped 10yr Bunds to all-time yield lows in 2016, and Brexit again has the potential to take 10yr Bund yields negative (Figure 4). Cannot also be ignored that EMU spreads widened sharply in 2016, post referendum, in particular for weaker European economies (Figure 5). 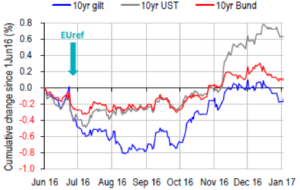 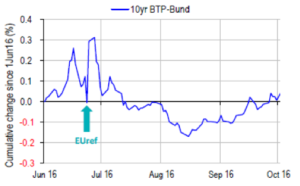 In light of the reaction post 2016 referendum, what could be the consequences this time? We admit the reaction in 2016 was fairly brief; however, we are under the impression that debt market is momentarily stuck waiting for clarity. Reaction is not easy, but in case of no-deal Brexit we expect a longer negative trends compare to the post referendum period, adding risk to European recession and spread widening expecting to be longer lasting, with a negative impact on several EU countries.

People can argue how relevant are the financial markets, but without entering into a never-ending story, we believe that equity investors somehow have already voted. Net outflows from UK equities have been at record levels by some margin on a rolling 3-year basis (Figure 6). Also, if we focus on a most recent timeframe, is now the case on a rolling 1-year basis as well: it appears that many (international) investors have sharply reduced exposure to the UK. 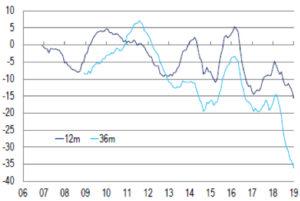 Unfortunately for UK, this trend has also been validated by the recent spike in its Equity Risk Premium (Figure 7); in short, for the first time over the last 20 years the UK’s ERP is now above the equivalent metric for Europe-ex UK (reference being France, Germany and Switzerland).

Difficult to say that the Brexit saga does not have an influence on this. 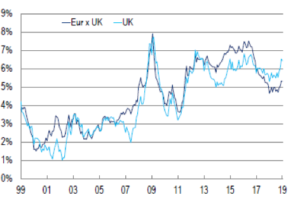 When moving closer to UK “domestic” stocks (sample includes Legal&General, Bellway, Lloyds and RBS), we also noticed that all the above is confirmed. Such UK focused players have been aggressively de-rated in the last 12-18 months (Figure 8). Not only, when we compare such de-rating with the expectations on earning for the same companies for the next 6 months (Figure 9), we notice a de-coupling of the trend that surely is not helpful and somehow validate further how the macro component (i.e. Brexit) has an heavy impact. 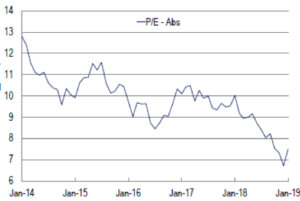 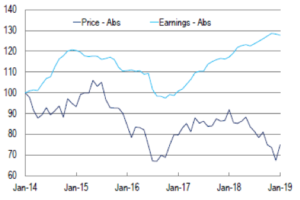 Equity stocks data points suggest Brexit has been already priced-in; probably the key question is if the impact has been already fully priced or not, and if the most recent news and a potential no-deal Brexit would further require a correction for UK exposure. Difficult to say, and as such it is difficult to run a similar analysis for stocks only partially exposed to UK or, viceversa, UK company with a huge exposure out of UK. The only real pillar at the moment, in our view,  is that no more capital will be put at risk till when deal (or no-deal) details will be frozen.

In summary, it seems that the equity markets have been faster than the real economy and debt markets in trying to price-in the “Brexit impact”. We believe that more than the “Brexit impact”, recent investors decision have been influenced by the uncertainty around the real rules of the Brexit and as such things will continue to move in this direction till when clarity will be given.

Among the three elements touched in the paper – real economy, debt and equity markets – probably the less reactive so far has been the real one, for which, with exceptions for real estate and retail related matters, data did not show a huge shocks …. so far.

It is also fair to say that, talking with international investors, there are some following the Brexit as a source of opportunities, through which buy cheaper assets for which the fundamental (long term) value is intact, with or without Brexit.

Speculation can be made, but we are not here for that; hopefully we rather flagged key interesting items to be monitored…but reality is that we still need to see what Mrs Theresa May will be able to deliver. Honestly, good luck to her!

This website uses cookies to improve your experience while you navigate through the website. Out of these, the cookies that are categorized as necessary are stored on your browser as they are essential for the working of basic functionalities of the website. We also use third-party cookies that help us analyze and understand how you use this website. These cookies will be stored in your browser only with your consent. You also have the option to opt-out of these cookies. But opting out of some of these cookies may affect your browsing experience.
Necessary Sempre abilitato
Necessary cookies are absolutely essential for the website to function properly. This category only includes cookies that ensures basic functionalities and security features of the website. These cookies do not store any personal information.
Non-necessary
Any cookies that may not be particularly necessary for the website to function and is used specifically to collect user personal data via analytics, ads, other embedded contents are termed as non-necessary cookies. It is mandatory to procure user consent prior to running these cookies on your website.
ACCETTA E SALVA